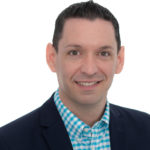 I’ve lived in the Tilly Mill / Winters Chapel neighborhood for 9 years. One thing that’s remained a constant has been the blighted and functionally obsolete shopping center at Tilly Mill Rd and Peachtree Industrial Blvd a couple of blocks from my house, and next door to our beloved elementary school. It’s been a while since the news broke about its possible redevelopment so I thought I’d fill you in on the latest.

The center’s functional obsolescence is due to a number of factors, including the property’s age and years of neglect, as well as the center’s topography and its outdated configuration. I’ve been asked why a grocery store couldn’t go on this site, so I asked a commercial real estate expert and his response was, “Shopping carts roll down hills”. I felt like an idiot and didn’t ask any further questions.

In 1986 there were two ways I could have come home from work. I could take the Tilly Mill Exit on I-285, or take a right at the four-way stop at PIB and Tilly Mill. This put a lot of eyeballs on this shopping center and it thrived for a number of years. When the Georgia DOT raised PIB and closed the Tilly Mill Exit, they created a Doraville bypass that eliminated the primary access and visibility of the center. The property has not been a viable retail center since its latest decline began over 15 years ago. Through the years I’ve reported gang graffiti and dumping by careless individuals that the owner has been responsive to fixing. In its current condition, the property is a drag on Doraville’s future.

PROJECT DESCRIPTION:
Kaufman Capital Partners plans to redevelop approximately 9 acres of the 14-acre “The Village at Tilly Mill Crossing” property into a Class A market-rate multi-family property, containing approximately 320 residential units and 3,500 square feet of commercial space, and 7,500 square feet of amenities that are typical for a development of this scope, quality, and size. In addition, a large section of the existing shopping center will remain in the southwest corner. The project received final zoning approval on August 5, 2019.

DETAILS ON INCENTIVE
On April 6, 2020, the Doraville Development Authority entered into a Memorandum of Understanding (MOU) with the developer and agreed to a unique incentive where the developer, in exchange for an administrative payment and public benefits detailed below, will be sheltered from paying the increase in taxes that would otherwise be owed for a period of time.

Additionally, the developer will pay the Doraville Development Authority roughly $63,000 upon closing this summer. There are major benefits to both parties. (see FAQ below on other revenues the city will receive).

Next, the developer will take this MOU and begin underwriting with private capital and investment banks to finance the project. The Development Authority is giving the developer until August 2020 to close on the financing and file permits with the City of Doraville, or they will lose the incentive.

Unlike incentives at Assembly and many others in the area, there is no set number of years on the incentive. Realistically they could reach it in less than 10 years, but the Development authority did cap it at no more than 20. 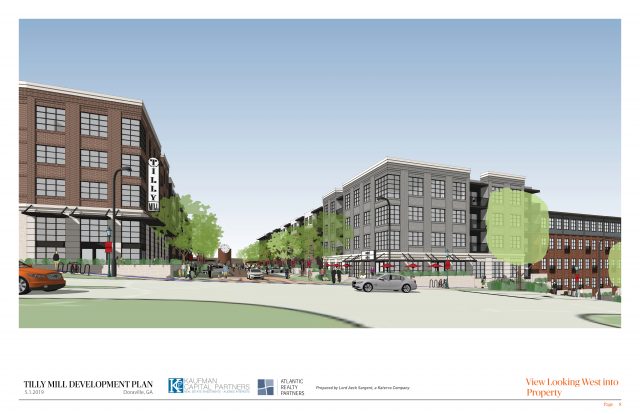 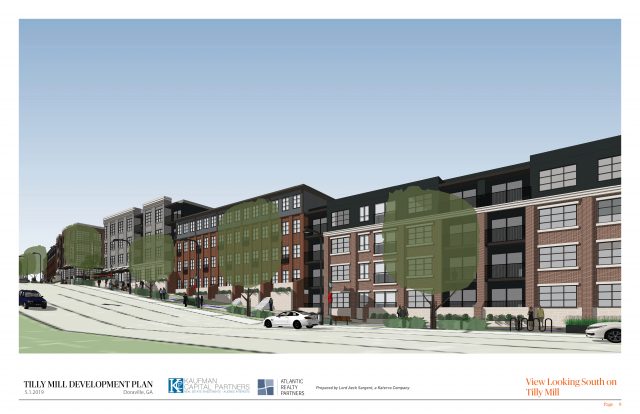 WHAT BENEFIT DOES THE CITY GET FOR THIS INCENTIVE

Doraville Officer Housing – Hero Housing
As an additional public benefit, I asked that they set aside three units in the community for Officer Housing or “Hero Housing” at a discounted “affordable” price point for three City of Doraville Police Officers. This will serve to add an additional measure of security for the project, while also helping the city attract quality talent living in the community they serve. It is appropriate for the city to receive a public benefit when a developer asks for an incentive. I am not aware of a deal similar to this anywhere in Atlanta, and I would like to thank Kaufman and the other directors on the DDA for making this happen.

New Queueing Lane for Hightower Elementary
In exchange for the incentive, the developer has also agreed to add a traffic queuing lane for Hightower Elementary School. This involves widening Tilly Mill slightly that can also be used as on-street parking during weekends and times that school is not in session. This will address a major transportation issue in our community that everyone in the neighborhood is familiar with. The developer will finance and construct these improvements with no city of Doraville funds.

Remaining Commercial Area
The community will continue having a neighborhood shopping center with tens of thousands of square feet of retail space. The developers have committed up to $150,000 for additional improvements to the remaining commercial building and parking lot to ensure seamless and attractive connectivity to the project.

Millennial Housing – Approximately 400 new residents to the City of Doraville
It is anticipated that approximately 400 new residents will live at this new community, the majority of whom are expected to come from the current daily PIB commuter traffic, and thus relocating from other cities and neighborhoods, providing new residents to the City of Doraville. Data suggests that the community is very desirable for the tens of thousands of people working at Technology Park in Peachtree Corners or Perimeter Center.

Economist Charles Whatley conducted an economic impact study and concluded that the 400 new residents could generate in excess of $4,400,000 per year of discretionary spending in the immediate area with local businesses. The ancillary benefit to the City of Doraville will be that these new residents will shop and dine in Doraville’s established commercial district nearby on Buford Highway.

Have questions? I’ve compiled an FAQ below if you’re a wonky person and like all the details!