Dekalb County will begin delivering trash bins and welcome packets on January 13, continuing through the end of January. The welcome packet is important for residents to read, as it explains enhancements to services and new procedures. All residents will receive two roll carts, one for trash and one for recyclables. The trash carts will arrive before February but residents should continue using the gray Advanced recycling tote until you receive your new recycle roll cart for a period of time. Glass will still not be accepted in recycling with the new service.
Please continue using your OLD CAN until February 5th. Starting on February 5th trash and recycling will be collected on Wednesday. The new container colors are green and blue. Feel free to reach out to me with any questions. 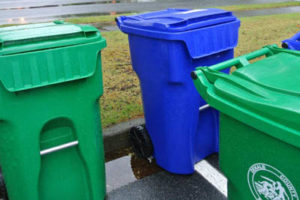 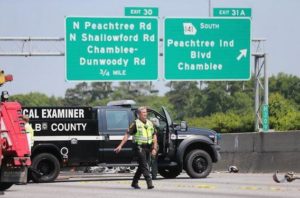 We received good news in Doraville District 1 that the Georgia DOT has fast-tracked the proposed intersection improvements at I-285 and Peachtree Industrial Blvd to begin construction in October of 2021 and will open by December 2022. I attended a meeting at least 3 years ago where they discussed this project but it was slow-rolled with the Top-End Project that has been delayed further. A series of public meetings will be conducted this month by the Georgia Department of Transportation to discuss the top-end toll lanes on Interstate 285 and the intersection improvement plans will also be revealed at these meetings.
I plan on attending the meeting on the 21st or 23rd. Maybe I will see you there!
The schedule for GDOT’s meetings:
For more information about the different projects, go to https://www.majormobilityga.com. 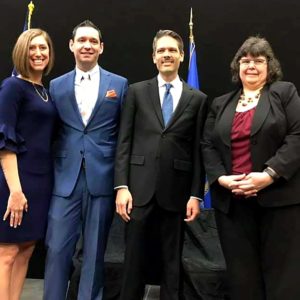 It was a packed house at Forest Fleming Arena for the January 6th swearing-in of Mayor Joseph Geierman along with myself and Rebekah Cohen Morris (District 2) and Maria Alexander (District 3). The Mayor and new council members join Robert Patrick (District 1), Chris Henshaw (District 2) and Stephe Koontz (District 3). It is my honor to represent you on the Doraville City Council.

The Legislature will convene on Monday and being that it’s an election year I expect it will be a whirlwind as usual with good and bad legislation.
Here are the bills I’m following:
House Bill 523 seeks to preempt cities from regulating short-term rental properties. This is referred to as the Airbnb bill. I will keep you updated on what they end up deciding.
HB 742 Public officers and employees; suspension of compensation for officials who are suspended because of indictment for a felony. Simply said if you are a politician under indictment you will no longer continue being paid. This will impact our disgraced Insurance Commissioner Jim Beck. This bill needs to pass
SB 282 University System of Georgia; designated research universities ensure at least 90 percent of early action admissions offered to GA resident students. This bill would require the state’s four research universities offer at least 90 percent of early action admissions to Georgia resident students. The four research universities are the University of Georgia, Georgia Tech, Augusta and Georgia State universities. Currently, 69% of students are Georgia residents and I hope some version of this bill can be passed.
Dekalb Ethics There has been a lot of talk about a Dekalb Ethics bill but no bills have been pre-filed as local legislation bills cannot be dropped early. I will watch this closely. The voters should be allowed the opportunity to vote on a clean ethics bill at the ballot box in November that just fixes the appointment process. The Dekalb Ethics board has not functioned in several years and the voters wisely rejected changes last year that weakened the ethics board.
Teacher Pay Gov. Kemp’s campaign pledge to raise teacher pay by $5,000 was a dominant issue in the last legislative session. He made a $3,000 down payment on that promise, but he hasn’t committed to fulfilling the remainder this year. This is a critical issue in the metro where we are at full employment and jobs outside of the teaching profession are plentiful. Dekalb Schools lose about 15% of their teachers every year.

The Doraville Planning Commission has an opening for a new commissioner to fill an unexpired term that ends in April 2021.

Preference will be given to residents that live in the following neighborhoods: Tilly Mill, Winters Chapel Hills, and Oakcliff Estates. All residents who have lived in the city for more than 12 months are encouraged to apply.